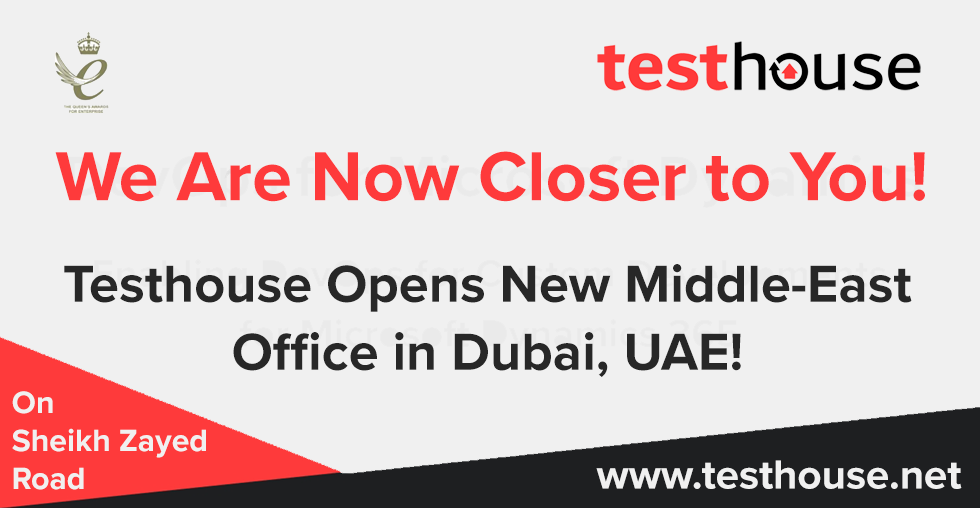 Testhouse is glad to announce that it has achieved another major milestone in its journey. On Saturday, the 25th of November, 2017, Testhouse inaugurated its new, upgraded Middle East office on Sheikh Zayed Road, Dubai, UAE, in the heart of the most happening business district of the most dynamic city in the Middle East. This office will be henceforth the new center of operations and point of contact for all of Testhouse’s activities in the Middle East.

The Testhouse Middle East office was inaugurated by Mr. Andrew Buxton, CMG, Chairman of the Board at Testhouse and ex-chairman of the prestigious Barclays Bank, London, a well-known personality in the world of international finance. Mr. Sug Sahadevan, founder and group CEO, Mr. Rajesh Narayan, CEO Middle East and India, Mr. Ani Gopinath, COO and MD, Ms.Malini Valsala, Head of Delivery and Mr.Shalu Niyad Kassim, Head of Sales for Middle East and India were present at the occassion, along with a number of UAE-based employees of the company.

Testhouse has had a presence in the Middle East/GCC region since the year 2003 offering premium software testing, Quality Assurance and DevOps services and Microsoft solutions in an on-site, off-site and offshore delivery model.

Today, it counts almost all of the major banks and financial organisations in the GCC among its clients. Its area of operation is spread across UAE, Oman, Qatar and Kuwait, employing more than 50 onshore and 100 offshore employees connected to the GCC market. As the company’s relationship with the region grew in leaps and bounds, it became imperative that it upgrade its physical presence to better reflect its stature and position in the market. Hence to better serve the interests of its clients, partners and vendors, Testhouse has taken this significant step, cementing its presence in its most important market, sending out a signal reiterating its focus and commitment towards the Middle East region.

Testhouse is deeply honored and thankful to everyone for their support and patronage throughout the years, and hopes that those relationships can now grow to the next level in a mutually beneficial manner for all parties.

The office is located on the 14th floor (1403-27) of the City Tower 2 at the Trade Centre 1, near the Durrah Tower and Hotel Crowne Plaza, on the seaside (western side) of the Sheikh Zayed Road (E11), opposite the iconic Emirates Towers. The Dubai Metro station nearest to the office is the Emirates Towers metro station. The Durrah Towers bus stop is right in front of the office building, serviced by buses from Al Ghubaiba, Al Quoz and Satwa.